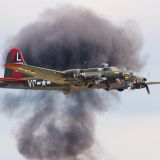 Travis Mauldin6 yıl önce
Peter what type of plane is this!!? I know it's ww2 era.
Report

Greg Byington6 yıl önce
It is a North American Rockwell OV-10 Bronco and was introduced in the late 1960's.
Report

Travis Mauldin6 yıl önce
I saw the "emblem" between those number 99 and 24. To me the emblem looked German to me, so i figured it was ww2 era. Thanks!
Report

Champdriver6 yıl önce
Travis, this is a very interesting aircraft and one of your questions could have been cleared up if Peter had initially given us the full name of it like Greg did. The ICAO designation of BRONC tells you absolutely nothing about the plane if you're not familiar with it.

Looking closely at the plane we can see it has a huge canopy designed for excellent visibility, even straight down. The large tires and long stroke trailing link main gear was designed for rough unimproved strips. Hard to see in this photo but a head on shot would reveal the engines are not piston engines but turboprop engines, not available during WWII.

What I'm trying to say is take the time to look closely at the details, they can reveal a planes purpose or mission. Some of your other recent questions could have been easily answered by yourself. Questions are fine, many people here can answer those, but if you took the time and had a little patience you could have easily answered your own questions.
If you do some research you'll learn more that way than if you just fired off a quick question and gotten a quick answer.

On to the Bronco, which is a fascinating plane. It was designed in the 60's primarily as a FAC, or forward air controller in Vietnam. It could carry a number of munitions, such as bombs rockets and machineguns, calling out and marking targets and protecting troops while waiting for the jets who had the heavier bombs and guns.
It was used by the US Air Force, Navy and Marines in Vietnam and was retired by the USAF in 1991.
The Bronco is still being used in the US by the BLM and California Department of Forestry and Fire Protection, or CDF. They coordinate aerial assets and are lead in aircraft for the tankers.

Broncos were sold to other countries and in this particular case to Germany. The Balkenkreuz, look it up, on the side of the fuselage is used by post WWII Germany and is different from the one used during WWII.
There are still some Broncos currently on the air show circuit around Germany and Europe.
Report