1 yıl önce eklendi
In a word, no. Here’s why: The baseline 737 configuration has proved to be remarkably resilient for a 55-year-old design with 13 major derivatives and more than 10,500 deliveries and counting since 1967. (aviationweek.com) Daha Fazlası...

Erik Davis 1 yıl önce 6
One word: NO. To compete, Boeing will have to start from the landing gear up! The 737 already is overburdened with stretching.
Yanıtla ↓•Permalink•Report

charlie klein 1 yıl önce 6
The 737 has been iterated to it's max (no pun intended). The benefits of a clean sheet design could be enormous. If, that is Boeing still has the ability to seeing am airplane properly. I know the development costs are enormous but that's the business you're in.
Yanıtla ↓•Permalink•Report

Andrea Gentilini 1 yıl önce 6
I agree, Boeing needs to develop an entirely new aircraft to fit in the empty space left by the 757: a wider fuselage, capable of comfortably accommodate between 200 and 250 passengers, and a range longer than that of the A321 XLR. This will be a winning choice, because Airbus doesn't have a product of this kind, and because there are people, like me, that don't like to travel for long hauls crammed in the tiny spaces of a low-cost company's aircraft !!
Yanıtla ↓•Permalink•Report

Rick Hein 1 yıl önce 3
A 757 replacement may benefit from a wider fuselage, but the 737 and 757 are both single aisle with nearly identical cabin widths.
Yanıtla ↓•Permalink•Üst•Report

David Loh 1 yıl önce 4
kyle estep when will people like you stop saying Non Western pilots and ground crews are Sub Standard? dont know how to fly planes, dont know how to maintain planes? Stop this nonsense ok? before the 2 fatal crashes did ANY Western pilot encounter an identical MCAS FAILURE and saved the plane? Yes? No? if yes why was no report made to faa? was made? then was not the whole aviation world warned by faa? As I told a first class WESTERN pax who snidely remarked we cant maintain airplanes, as i was trying to fix a overhead bin that broke during boarding, "BOEING MAKES THE PLANES.WE ONLY FIX THEM!"
Yanıtla ↓•Permalink•Report

Ian Harrison 1 yıl önce 2
Boeing need a new Narrow body design as the 737 design is really MAX out as recently demonstrated by 5he Max issues. This article supports this and the result of continued evolution into role not originally considered means more workaround and complex solutions which mean more failures and even more complexity with workarounds those compromise workarounds. Also there is a lot of 1963 design and construction in the 737 that will do with new materials to reduce weight, increase reliability and pe4formance and reduce manufacture and maintenance cost.
Yanıtla ↓•Permalink•Report

Peter Fuller 1 yıl önce 2
The article doesn’t really answer the “Could it compete?” question, but it renders the question moot by detailing the engineering and certification challenges to be met, making development of such a plane a practical impossibility. The -10 will be the last 737 version.
Yanıtla ↓•Permalink•Report

Robert Cowling 1 yıl önce 5
The development time would bankrupt the program. THAT is why Boeing used their ability to approve their own stuff to skate around the FAA, and kill two plane loads of human beings, and claim they were the victim.

They would have to change so much of the plane. The gear height, the wing configuration, etc. Otherwise they are just cut and pasting longer gear onto a challenged design. They lower the engine, but how low. Now that it's low, how do they blend it into the wing. Would moving it outward make the plane more stable, or inward. Would chevrons on the nacelle help. Will reversers stress the fuselage. Should the wing be bigger. Should it sweep more. Winglets, or no winglets. Do they need more bumps under the wings. Increase the dihedral angle. The questions, the tests, the length of time. THAT is why Boeing said 'trust us', and cut and pasted those big engine on, and lied about the stability, and installed that bandaid 'fix', and lied about the need for two sensors, and made the second sensor OPTIONAL.

It could/should take years for Boeing to do the thing they declared they don't do anymore: ENGINEERING! DOH!!!
Yanıtla ↓•Permalink•Report

kyle estep 1 yıl önce 1
Robert, while I agree the MAX shouldn't ( and probably the NG series ) have been ever built, the plane isn't inherently dangerous if flown by competent pilots and maintained properly. If you look at Ethiopia and Lion Air, you can clearly see that the design of the plane was less at fault than the former issues. I sent my wife home on a MAX a month before they were grounded and would send her on that company's planes again anytime.... I wouldn't put anyone on an Indonesian airline and safety records over the last 20 years prove why.
Yanıtla ↓•Permalink•Üst•Report

Mike Hindson-Evans 1 yıl önce 6
Kyle, I am with you - you can only jerk around with a 100-seat design from the 1960s (when did the 707 fuselage first fly?) so many times before something stretches too far.

The Royal Air Force has a long-standing principle for FAI proceedings - "only blame a dead pilot if you are absolutely certain that there is no other possible cause". I hope that your wife carries life assurance (I hope that I am summarising this correctly, without insulting anyone's professionalism).

Boeing were desperate to get the MAX into airlines, without needing any more training than "read a manual and play a DVD".

The decision-making process which enables airlines to optionally delete half of the indicators (including ones which would alert drivers to failed Pitot tubes or "MCAS is activated" will go down (sorry!) in history alongside the 1912 assessment that "it's only an iceberg".

Two years later, with the FAA doing what it should have done beforehand, along with Boeing being (slightly less dis-)honest, the plane should fly safely. Please God!
Yanıtla ↓•Permalink•Üst•Report

Robert Cowling 1 yıl önce 1
Kyle, it was proven over and over that blaming the pilots was a cop-out by Boeing and their cadre of turd polishers as they attempted to control/mitigate investor damage.

Making the system they installed to address their engineering incompetence OPTIONAL for pilot refresh training was heinous and unforgivable. If those flight crews were 'deficient' in any way, it was because Boeing DELIBERATELY made them that way! AND didn't put their bandaidd in the manual those flight crews were using to save human lives.

It wasn't the pilots, it was the plane. Unaffiliated pilots backed up that idea. The 'fix' went too far, and Boeing went too far to hide it. I hope your wife will be safe in a MAX. The next crash of a MAX could be the undoing of Boeing. Apparently the first two crashes didn't change Boeing enough, and I'm sad. I visited Seattle, and couldn't wait to visit the plant. I was like a kid in a candy shop. Seeing the birth of those planes. Seeing the Dream Lifter. Watching a 787-900 take off. WOW!!! Finding out that the head of Boeing is rotting, WOW!!! So tragic...
Yanıtla ↓•Permalink•Üst•Report

JMARTINSON 1 yıl önce -6
They didn't lie "about the stability". You did.
Yanıtla ↓•Permalink•Üst•Report

Robert Cowling 1 yıl önce 3
Installing the software 'fix', andd not informing pilots about it PROVES they knew the plane was a menace. AND their 'fix' was so poorly designed, it caused the crash. That and Boeing not making the management of that 'fix' prominent in pilot refresh sessions, and providing a simple switch to turn off the 'fix', and an alarm announcing that it was triggered.

Boeing KNEW the plane wasn't stable. And they 'fixed' it in a horrific way.
Yanıtla ↓•Permalink•Üst•Report 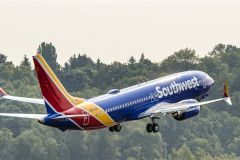 David Loh 1 yıl önce 3
My apologies if you are wondering what I am going on about editing. I seem to have mixed up flightaware with Youtube, where I can edit and delete my own posts.
Yanıtla ↓•Permalink•Üst•Report

David Loh 1 yıl önce 1
kyle estep when will people like you stop saying Non Western pilots and ground crews are Sub Standard? dont know how to fly planes, dont know how to maintain planes? Stop this nonsense ok? before the 2 fatal crashes did ANY Western pilot encounter an identical MCAS and saved the plane? Yes? No? if yes why was no report made to faa? was made? then was not the whole aviation world warned by faa? As I told a first class WESTERN pax who snidely remarked we cant maintain airplanes, as i was trying to fix a overhead bin that broke during boarding, "BOEING MAKES THE PLANES.WE ONLY FIX THEM!"
Yanıtla ↓•Permalink•Report

Robert Proctor 1 yıl önce 2
Lipstick on a pig, even ifs a nice pig its still a pig.
Yanıtla ↓•Permalink•Üst•Report

JMARTINSON 1 yıl önce 2
Robert, I'm thinking of getting into sales and this is what they call a teachable moment. Would you mind filling in the blank?

Robert Proctor 1 yıl önce 3
Well look, our hat wearing llamas are actually very nice and we can even supply them with lipstick and are willing to negotiate a special discount for you. They do look great although they can be a bit tricky to ride.
Yanıtla ↓•Permalink•Üst•Report

stratofan 1 yıl önce -7
I am still slightly surprised t those that have been around aviation for a while, still think that a company would purposely design a flawed airplane. Sadly, for the victims of Lionair and Ethiopian Air, were the end result of flawed maintenance and inadequate trainng. Or possibly, a huge mistake like Korean Air 007, and the Korean Air 747 that crashed into Nimitz Hill on Guam. The MAX is not, repeat not a flawed airliner. If it is flown by competent pilots, with the correct amount of training, not a dvd and a video conference tutorial.
Yanıtla ↓•Permalink•Report

Robert Cowling 1 yıl önce 4
'Blame the pilots' is a cop-out. The plane was CLEARLY defective, Boeing knew it, and they bandaided it, and back filled to cover it up. All to save investors, and managements jobs.

It sadly seems to be the New American Way. 'You're holding it wrong' from the iPhone debacle.

Blame the pilots is ridiculous. They TRIED to save their planes, and the system, the bandaid Boeing installed, FOUGHT THEM THE WHOLE WAY!
Yanıtla ↓•Permalink•Üst•Report