7 yıl önce eklendi
Interpol does not believe the disappearance of the Malaysia Airlines Boeing 777-200ER was the result of a terrorist attack, its head said on Tuesday Mar. 11. Interpol (International Police) secretary general Ronald Noble also suggested that two men who boarded using stolen passports and had aroused suspicion may have been smuggled by traffickers, reported Reuters. The plane, with 239 people on board, has been missing for four days and a search involving crews from 10 countries widened on Tuesday… (airguideonline.com) Daha Fazlası...

steve rogers 7 yıl önce 2
question ? how long would it take you to find a penny in a cloudy Olympic size pool , finding that plane is 100 times harder .sorry to say ....
Yanıtla ↓•Permalink•Report 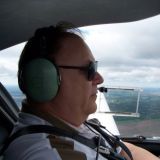 Mike Buchanan 7 yıl önce 1
Pick a scenario any scenario you are just as likely to be correct as Interpol, CIA, FBI and CSIS. It's all based on theories and probabilities, not any given amount of fact. Until the plane is actually found and the crash is properly investigated will anyone truly know.
The swimming pool theory is pretty valid.
Yanıtla ↓•Permalink•Report

joel wiley 7 yıl önce 1
Not terrorist act? Maybe semantics are in play here. Is piracy for profit (monetary or other valuation) considered terrorism.

According to the FBI website terrorism includes, among other features, acts that:
"Appear to be intended (i) to intimidate or coerce a civilian population; (ii) to influence the policy of a government by intimidation or coercion; or (iii) to affect the conduct of a government by mass destruction, assassination, or kidnapping." http://www.fbi.gov/about-us/investigate/terrorism/terrorism-definition

As more information dribbles out, it appears increasingly likely that the aircraft may well have landed somewhere. As such, I infer an intent for further use for some, as yet, unknown purpose. If that further purpose is, in itself, a terrorist act, then the hijacking would be covered under the terrorism definition.

What is more worrisome to me is the possibility that this has been carried out by some nation/state as a preliminary act of war. The players and adversaries are completely unknown.
Yanıtla ↓•Permalink•Report

Mike Buchanan 7 yıl önce 1
Yet just another scenario that is as credible as any other.
Yanıtla ↓•Permalink•Üst•Report

joel wiley 7 yıl önce 1
That Interpol believes that the two people currently identified as Irani flying with stolen passports were not terrorists. Based upon that they are concluding this was not a terrorist attack according to a source. That does not eliminate the possibility of another group that were terrorists- it may just mean the Iranis picked the wrong flight.

Then again, it may be that Interpol is being deceptive. It wouldn't be the first organization to do so about this flight.
Yanıtla ↓•Permalink•Report

steve rogers 7 yıl önce 1
its not the first plane to go missing after four days , this plane will show up , theres only two places it can be , ground or water , come rain or shine it will be found , until then , you can theorise till the cows come home
Yanıtla ↓•Permalink•Report

joel wiley 7 yıl önce 1
Considering the tweet is from the US Embassy in Malaysia, somewhere westerly.
Yanıtla ↓•Permalink•Üst•Report

CaptainFreedom 7 yıl önce 1
Based on all of the incompetence and misguidance so far, maybe they should begin their search off the coast of Florida.
Yanıtla ↓•Permalink•Üst•Report

PhotoFinish 7 yıl önce 0
It's more like the headlines and stories are being deceptive.

Anyone and everyone is taking any statement by any official and extrapolating the statement to say something that was never intended.
Yanıtla ↓•Permalink•Report