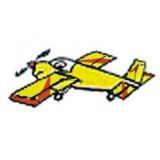 Jetmen sponsored by Skydive Dubai, presumably sponsored by 'Dubai Inc.' Emirates, some say, sponsored by Dubai Inc.' Dubai Inc. - shameless self-publicist. Imagine the scene; Some Skydiving Dudes chatting - "Jetman is the worlds smallest manned 4 engine Jet, how cool to have a couple flying with the worlds largest 4 engine passenger jet..." "I know a bloke with a few 380's, perhaps he'd lend us one for an afternoon..." "Yeah, I know another bloke with a Go-Pro, maybe he could film it for us..." A few 'What are you doing next Friday' phone calls later...

Brief 'Making Of' https://www.youtube.com/watch?v=dFCQJ5sYGtI So, these guys didn't just say "Hey, lets chase that 380" Seems a little more thought went into it.

How much of an 'Issue' is this really? I've flown Emirates for many years. With their first 'Seat Back' screens the controller was also a phone handset, with a slit down the side to swipe a credit card. You could use this to call Terra Firma, presumably at great expense, I never tried it, nor did I ever notice anyone around me using it. More recently many of their planes have 'AeroMobile', you can use your own phone to make a call presumably via a 'Cell' on board linked via satellite. I guess this would be billed as 'International Roaming' by your telecom. Again, never tempted to use it, never noticed anyone else doing so around me. I can only assume that either these services were not widely used, or that anyone using them did not stand out any more than someone in a nearby seat having a normal conversation with an adjacent passenger. Just maybe 'Social etiquette' will be sufficient for most people to be discrete in their use of phones on planes, and it micht be considered a

I read the NYT Article, and then scrolled down to their Comments, interested to see what opinions the 'General Public' might have, In there I saw and followed a link to the IEEE Spectrum report, and crawled through that too. Then I returned to this forum to see what a presumably well informed and knowledgeable crowd had to offer. Nothing seemed to lead to any absolute conclusions; Some PED's could potentially/probably interfere with some Flight Systems, in some circumstances. Some PED's probably don't interfere in most circumstances. Some PED's couldn't interfere in any circumstances. Now, consider the Cabin Crew, who have to try and enforce the regulations. They already have to be knowledgeable and proficient in many skills and subjects in order to carry out the tasks, duties, and responsibilities of their jobs. How can they be expected, on top of all this, to be experts in an ever changing multitude of products that may, or may not, be more, or less, safe to use on-board at

Notice the runway orientations, every flight would have at least one crosswind take-off or landing, could make things a bit tricky/exciting on a blustery day. And they do have a few of those in the Islands.

Your original comment makes more sense now with the added context you provide. I must admit my experiences are more 'straight through' as I'm departing or arriving, so I only spend an hour or two at most from Check-in to Gate, I've never had to endure a long Transit. I guess it could get a bit glum hanging around for several hours.

In the case of Abu Dhabi/Etihad and Doha/Qatar Airways, you may be helping them out when you fill your tank, but not DXB/Emirates. a) Dubai has so close to No Oil left as makes no difference. Oil is not a significant contributor to Dubai GDP. b) Dubai Duty Free (airport retail) manages to bring in more than a few Bucks. c) Emirates somehow manages to make a profit. Dubai Airport, Dubai Duty Free and Emirates are all owned by the Dubai Government, and far from DDF and EK being subsidised they pay dividends back into the Govt pot. EK pays the same Airport Charges as all other 150 or so Airlines using DXB, which has an Open Skies Policy, and EK buys its Fuel at DXB from Chevron, BP, and Shell, same as everyone else.

Appalling compared to where? Dubai is my 'Home' airport, so every journey begins or ends there for me, with a chance to see how 'others' do Arrivals and Departures in between. In the last several years I've visited; LHR (T2, T3), LGW, DOH, MCT, DEL, UDR, GYD, FRA, BAH, MAA, DUS, BEY, KWI, MXP, SCQ, STN, HKG, LCY,LAX. SFO, IAH, JFK, ATL, YYZ, ORD, MIA, POS, PEK, PAD, EWR, PHL, BRU, VIE, PRG, AMS, HEL, CDG, BUD, GIG, GRU, YVR, I can't think of any that were significantly better than DXB, but I have tried to forget many that were noticeably worse. I admit a I may be biased towards DXB, but I try not to be prejudiced against anywhere else. For an Airport that's currently handling 50+ million passengers, and ranks just outside the top 10 busiest in the world, I'd say the experience from Curbside to Seatbelt is one I look forward to more than dread. As for the Shopping Mall reference, DXB doesn't count as a 'Real' Mall, where's the Shark Filled Aquarium or the Indoor Ski Slope.

Can't account for 11, but access to the terminal would be under the Apron, so that's one, then there is ground level which would be Ground Ops, Passengers area starting at 1st floor, 380 has double deck, with 2 levels of jetways, so Business/First access and lounges would be another. T3 concourse B and T1 both have Hotels within them, so that could be another 3 or 4 if they follow the same pattern. I guess there'd need to be some Offices somewhere, and Staff facilities, canteen and such like, and down below the Apron access corridor level I'd expect another level or two for the unseen Upmpa Lumphas of Utilities and Maintenance. When they first started building it began with a pretty deep hole in the ground, wouldn't surprise me if much of the background activities required to run a busy Terminal are hidden down there.

Recently, going through Security at London, Heathrow, they spotted my Swiss Multitool (Swiss Army version of Leatherman) that I had forgotten to shift to my checked bag. "This is bad, right" I said, "Maybe not Sir, I'll check with my Supervisor". Well, after a polite conversation I was given a couple of options, Ditch It or Mail It. I chose Mail It. They placed it in a bag and gave me a tear-off tab with a serial number and a web-site URL and said check the site after about 24hr. On the web-site I put in an address and paid the fee with my Card, A few days later it was delivered to a friends house in UK for me to pick up on my return. Cost me 19 quid (GBP), it is quite heavy for it's size, but then the Tool cost about 50 quid. When I was busted the officers were at all times civil and helpful, and whilst the providers of the Mail service are in it to make money, I didn't feel unduly ripped-off. I was thankful of the chance to correct my careless error, rather than just lose a valuab