Return to Browse Photos
Upload Your Photos
Share This

Submitted about a year ago

Lewis Trippabout a year ago
Took my Son, Jeff for a ride in I think, that very aircraft.
Report

John moffittabout a year ago
Looking good at 90+ years.
Nice photograph
I would like a ride in this beauty.
Report

Paul Wisgerhofabout a year ago
Belongs to the Experimental Aircraft Association.
Report 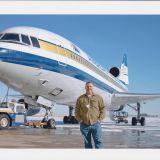 John GiambonePhoto Uploaderabout a year ago
Yes, this is an EAA Bird. Ive rode in it a couple of times. The thing that surprises me about these Tin Goose's is just how incredibly LOUD they are on the inside, and not so much on the ramp outside shooting them. Thanks for your commments Lewis, John, & Paul.
Report

Paul Holdenabout a year ago
NO Flaps
Report

Bill Sewardabout a year ago
Took the entire family for a ride on her in Concord, NC in 2012. Memorable experience.
Report

Matt Smithabout a year ago
Loud on the inside is right: I got to ride shotgun up front ("took the entire family for a ride" too) behind the nose engine in ish 2007-8 at an EAA fly-in at Camarillo CA.

The PBS Nova program on the DC1-2-3 development mentions that a driving requirement for the airliner was .. NO NOSE ENGINES!
Report

a mentorabout a year ago
in the '80s, one was parked in a private quonset style barn in Gilroy, CA
Report

user3956about a year ago
Seems like the true meaning of a "flying wing", nice shot!
Report

Jaime Francoabout a year ago
I would like to know when this bird is going to be n ear Los Angeles.
Report

Pat Cookabout a year ago
In 1943, my parents were still newlyweds. Dad was sent to Fairbanks to survey what was to later to become Eielson Air Force Base. Mom remained in Anchorage where she worked as a nurse at the Alaska Railroad Hospital.

There was a long weekend and she decided to fly up to Fairbanks for a surprise rendezvous with Dad. So she went out to Merrill Field and boarded a Star Air Service Ford Trimotor for the flight to Fairbanks.

In those days aviation was still pretty new to Alaska, let alone scheduled air service. In those days, there was no IFR (instrument flight rule) when the clouds rolled in; it was only VFR (visual flight rule). However on the Anchorage – Fairbanks route they did have The Alaska Railroad tracks as a navigation aid. The pilots would just fly close to the ground where they could keep an eye on the tracks for a reference.

On this particular flight, they boarded the Ford Trimotor and departed. The clouds set in as they were flying north. They started to follow the railroad when the clouds really socked in. The pilot turned back, and returned to Merrill Field, Anchorage. Everyone got out of the plane, and the pilot told the station manager what happened.

Another pilot heard what happened and piped up, “I’m not chicken, come on, let’s get back on the plane.” So everyone trooped back on the plane, again. They set off for Fairbanks and followed the railroad, real close, and they made it.

It was a happy rendezvous until Mom told Dad about the flight. When it was time for my Mom to return to Anchorage, Dad insisted she take the train.
Report

a mentorabout a year ago
@Pat Cook; Dad dearly love mom and was VERY wise;
There are OLD pilot and there are BOLD pilots -- but NO old AND bold pilots

Seb Sebabout a year ago
I flew in this too. The way it flew reminded me of a big three-engine Cub.
Report

serge LOTHabout a year ago
Is it the one based in Oshkosh???
Report

Peter Fullerabout a year ago
Somewhere I read a wisecrack about the Ford Tri-Motor, to wit, that its engines are very efficient at converting gasoline into noise.
Report

Dan Rodgers6 months ago
Take off, cruise, and landing speed were nearly the same.
My son's first plane ride was in one of these beauties.
Report

This website uses cookies. By using and further navigating this website, you accept this.
Dismiss
Did you know that FlightAware flight tracking is supported by advertising?
You can help us keep FlightAware free by allowing ads from FlightAware.com. We work hard to keep our advertising relevant and unobtrusive to create a great experience. It's quick and easy to whitelist ads on FlightAware or please consider our premium accounts.
Dismiss