4 yıl önce eklendi
London - British Airways will retire its last remaining Boeing 767-300ERs by the end of this year. Nearly 28 years after receiving its first 767, the British national carrier will end the operations of five 767-300ER in the fourth quarter of 2018. The last remaining units in service are the 767s registered as G-BNWX, G-BNWZ, G-BZHA, G -BZHC and G-BZHB. (airlinerwatch.com) Daha Fazlası...

Terry McKinney 4 yıl önce 9
The 767 is our favourite aircraft. We like twin aisles and the 2-3-2 seating especially the 2 on the sides for a couple; no stranger to climb over or to climb over you. The 330 and 340,s also have two on the side but the 767 is much more common for us here in Ontario.
Yanıtla ↓•Permalink•Report

Mike Hindson-Evans 4 yıl önce 4
This 2-3-2 seating plan is one which I remember fondly from the old AA54/AA55 rotations between Manchester (northern England) and Chicago O'Hare some 25 years ago. It is also reassuring that Boeing are still building 767s (admittedly a "Frankenstein" version combining bits from various 767 family versions) as the new airtanker for the US Air Force. I believe that the naming designator is "KC-46 Pegasus" and they are dribbling into front-line service, supporting (and eventually replacing around 100 of) the vintage KC-135 Stratotankers.
Yanıtla ↓•Permalink•Üst•Report

Mike Hindson-Evans 4 yıl önce 3
This retirement closes a chapter on the poisoning of a Russian dissident Alexander Litvinenkowith Polonium-210: (report from 30-Nov-2006):

The airline (BA) said it was contacted by Scotland Yard on Tuesday night and alerted that it "had a problem" with three of its aircraft. It will be unable to recover the 767 currently stranded in Moscow without permission of the British government, because of the contamination.

While there was no immediate confirmation that polonium 210 is the substance discovered on the BA aircraft, it is widely assumed at the airline that this is the case.

Each plane can carry 252 passengers plus two pilots and nine cabin crew. The airline is appealing initially to hear from passengers on four flights:

The other routes that the planes are believed to have flown are from Heathrow to Barcelona, Düsseldorf, Athens, Larnaca, Stockholm, Madrid, Istanbul, Frankfurt and Vienna.

An airline spokeswoman said: "We are being advised that there is a low risk. But we are keen to contact passengers and ensure that they are aware of what happened and to contact NHS Direct if they are concerned."

BA was trawling passenger lists and setting up a dedicated call centre last night as it raced to contact thousands of passengers. *end extract from 30-Nov-2006
Yanıtla ↓•Permalink•Report

patrick baker 4 yıl önce 2
BA 767's have been an odd duck amongst the fleet, never sure of their niche.
Yanıtla ↓•Permalink•Report

Andy Cruickshank 4 yıl önce 5
Maybe in today's world, but when they were purchased the BA fleet was mostly Boeing including 737, 747, and 767 so not so much an odd duck. I would agree that it is surprising that they kept them as long as they did.
Yanıtla ↓•Permalink•Üst•Report

chalet 4 yıl önce 3
Your assertion runs contrary to what the 767 actually is: almost 1200 examples built in its almost three decades of operation and several more on order. This is called an unmitigated success story.
Yanıtla ↓•Permalink•Üst•Report

Torsten Hoff 4 yıl önce 4
He's not talking about the 767 in general, but the 767 in the British Airways fleet.
Yanıtla ↓•Permalink•Üst•Report

alex hidveghy 4 yıl önce 1
Not at all!
The odd duck was the three-engined L-1011 TriStar, most sold to the RAF as tankers and military airlift......
Yanıtla ↓•Permalink•Üst•Report

Jesse Carroll 4 yıl önce 2
One of the engineers who help design and build the DC-10, L-1011,
says it is best suited as a tanker. Will carry a vast more retro, freight than any other aircraft of it's size! Just got a bad rap because of a improper engine change! Ask Fed Ex how they like theirs...just saying!
Yanıtla ↓•Permalink•Üst•Report

alex hidveghy 4 yıl önce 1
Yes, I know! I see FDX DC-10/MD-10 all the time at KLAS. Plus I flew in the cockpit of a BA L-1011 from LHR to CPH when they were new. Further, I was "rescued" by a RAF L-1011 from Ascension Island after being stuck there for more than a week when I had another assignment elsewhere in the world. My aircraft, a B747, and only aircraft providing a life line shuttle between the Falklands and the UK was banged up and out of commission at RAF Brize Norton, UK! How's that for a bit of history???
Yanıtla ↓•Permalink•Üst•Report

Torsten Hoff 4 yıl önce 1
I thought its checkered reputation was due to the cargo door problems and resulting fatal crashes.
Yanıtla ↓•Permalink•Üst•Report

bentwing60 4 yıl önce 2
I picked up a brand new airframe at ICT in the 80's and put the gear handle up and they didn't. Taught me that brand new doesn't mean without fault. And I can't believe they're that old either.
Yanıtla ↓•Permalink•Üst•Report

joel wiley 4 yıl önce 5
I keep having trouble believing we're that old either. Another testament to proper maintenance.
Yanıtla ↓•Permalink•Üst•Report 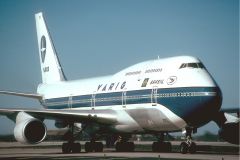 Jose Barth 4 yıl önce -1
in reality the B767 has very slow cruising speed (.70) Mach, and lack of comfortable accommodation and current entertainment for passengers
Yanıtla ↓•Permalink•Report

alex hidveghy 4 yıl önce 1
Quite a bit of difference!
Not many widebidiedaircraft cruise at .70M. Maybe in turbulent weathe you dial it back to that, but cruise?
Yanıtla ↓•Permalink•Üst•Report